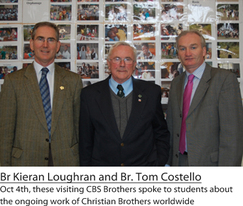 On Thursday the 4th of October we were blessed in Kilkenny CBS by the visit of Br. Kieran Loughran and Br. Tom Costello who spoke to our students about the Edmund Rice Beyond 250 Appeal.

Their day began at 8:45am as they spoke to our entire fifth year group in the GP room and it continued in that vein, a class group at a time, until they finished with the first years at 3:45pm. The fact that their audience exceeded 100 pupils each time did not deter these fine men in the least. They were as passionate and convincing in the finish as they were when they had begun that morning.

We were enthused, educated and enlightened by both their use of video presentation and their accounts of their own experiences, not only of Immersion throughout the world, but their lives in the Christian Brothers community. One very quickly got a sense of what it meant to be a Christian Brothers School and the global nature of the good work being done on many continents following directly in the footsteps of Blessed Edmund Rice. 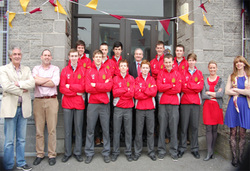 Immersion Team 2012
The Brother’s presentations were all the more relevant and realistic following our own recent Immersion Project in Zambia on the 25th of March 2012. Eleven students and five teachers embarked on our inaugural Immersion Project. We spent two weeks in the company of Br. Mick O’Donoghue and the Christian Brothers in Mufulira, northern Zambia. We are already preparing for our return Immersion trip to Zambia in Easter 2014.

We left the presentations feeling a part of a bigger, special and dynamic group where the necessity was less one of “keeping the spirit of Edmund Rice alive” -as it is very much alive, but more one of taking our place and playing our part in an existing, living and vibrant organisation working on the world stage. Thursday the 4th of October was the feast day of St Vincent De Paul and many references were made to the truism ”in giving we receive”.

The “giving“ began in earnest the following day with a non-uniform fundraiser. Our students raised €906.20 with contributions from staff members bringing this figure above the €1000 mark. This generosity follows a similar fundraiser in May when €1050.75 was raised by the endeavours of our young men to aid the famine relief in Niger in West Africa.
The spirit of Blessed Edmund Rice was evident yet again on Monday 8th of October as six of our Transition year students, inspired by the presentations of the previous Thursday, embarked upon a project to sell the Beyond 250 wristbands throughout the school and beyond. Their intention is to set up a mini company to market the wristbands and to highlight the plight of the African women who make them. We have no doubt that in their “giving” they too will “receive” and we wish them every success in this venture.