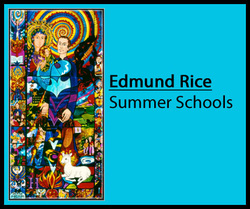 Edmund Rice Summer Camp 2016
Another successful camp was held again this year with the usual collaboration between CBS past-pupils and Loreto past-pupils to give something back to improve the summer of young people in Kilkenny.

Well done to all those who gave up two weeks of their holidays to volunteer to make the camp a success.

Once again CBS and Loreto past-pupils are preparing to run the Edmund Rice Summer Camp in Kilkenny. Sixth year students who will be over 18 years by March 31st, 2015 can apply to volunteer for one or two weeks as a helper on the camp. Application forms will be available in school on Friday 30st January 2015 when past-pupils such as Tom Cantwell, Liam Meighan and Cormac Lynch will give a presentation to the sixth year students on the summer camps.

Parental help is also requested.
Spring Clean:
To raise funds for the summer camp the Past-Pupils are doing a clothes collection. If you have any old, clean clothes you could bag and drop into CBS Secondary School by Thursday 29th, Jan. 2015 we can pass them on to the boys who will use them to raise funds for the camp. Please note that NO CLOTHES CAN BE ACCEPTED AFTER THURSDAY 29TH.

Once again we are proud of our past-pupils and their spirit of generosity in helping others.
It is a proud tradition of the CBS Kilkenny to continue in the Spirit of Edmund Rice and we thank all members of the school community for supporting all our efforts to foster this generosity of spirit in our young men.

ABOUT THE SUMMER CAMPS
For the past seven years CBS students and Loreto girls have volunteered to run the Edmund Rice Summer Camp. This Camp affords children from more disadvantaged circumstances the opportunity to be involved in a summer camp with lots of fun activities available to them. Much to the delight of Mrs. Ryan, who brought the first camp to Kilkenny seven years ago, the Camp is now being planned, organised, run and recruited for by past-pupil volunteers who have gone on to third level. While the camp is not directly connected to the school, the students who get involved are exposed to the true spirit of Edmund Rice and the value of the volunteer experience.  It is terrific to see small seeds sown in secondary school flourish, grow and continue when our young men leave school.