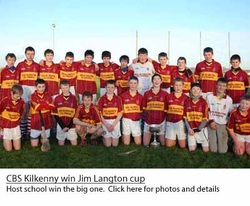 In Palmerstown four teams went into battle: Kilkenny CBS 1, Callan CBS, Clonmel CBS (High School) and Dungarvan CBS. Meanwhile Kilkenny CBS 2, Thurles CBS, Charleville CBS and Blackwater CC (formerly Lismore CBS) locked horns in the second group. Thankfully conditions were dry though quite cold as both quartets of teams swung into action at 10 O’clock. By lunchtime the top 2 teams from each group, Kilkenny CBS 1 and Dungarvan CBS from Group 1, and Thurles CBS and Charleville CBS from Group 2 provided the pairings for both the Shield and Cup Finals.

Despite the toll the efforts throughout the day had taken on all four teams both finals were extremely well-contested and provided high quality entertainment and plenty of tension for those present. In the Langton Shield Final Dungarvan CBS pipped Charleville CBS by a single point in a thriller. The minimum one point margin again proved just enough in the Langton Cup Final as host school Kilkenny CBS 1 edged Tipperary rivals Thurles CBS in a tough and uncompromising affair. Principal Tom Clarke presented Glen Watters of Dungarvan CBS with the Shield and later Kilkenny CBS Captain Conor Flynn with the Jim Langton Cup for the first time.

Well done to all who participated in the tournament. Kilkenny CBS would like to thank all participating players and teachers, Kilkenny Co. Board, the two referees on the day, Paschal Connolly and Eamon Mansfield and the Dicksboro GAA Club for the use of their pitches. We look forward to defending this title in 2014 in this ever-increasingly popular Juvenile Hurling Tournament. 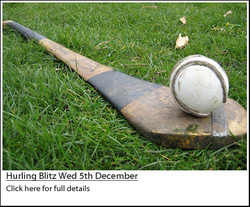