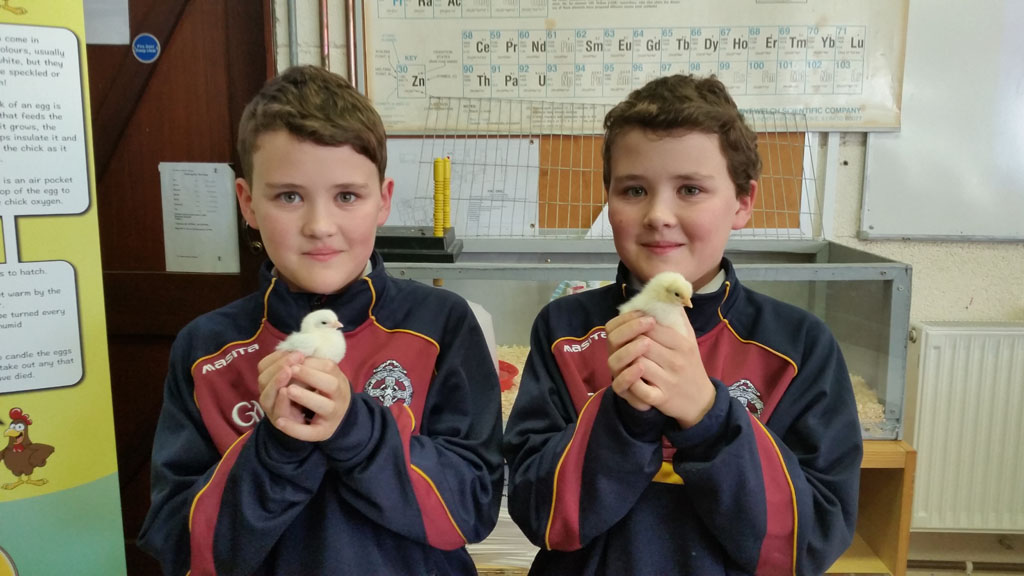 Welcoming the Nore Valley chicks!
From November 14-18 2016, CBS Kilkenny celebrated Science Week where we saw our Nore Valley incubator chick project come to fruition and two senior teams enter the Regional Science Quiz,
CHICK INCUBATOR PROJECT
​
On Wednesday 26 October 2016 Ms.Mercer's 3rd Year Science class were in a more joyful mood than usual. No it wasn't because the Junior Cert was cancelled it was because they were expecting a special delivery, an incubator for chicken eggs from Nore Valley Park. This news did not go unnoticed from other classes especially the TYs who couldn't resist a peek.

Students were told basic information by a guest speaker from Nore Valley on how to look after the baby chicks properly, such as how often they need to be fed, the temperature they are kept at and how to tell the difference between a baby chick egg and a non fertile egg just in case all the study made the 3rd Year's a bit peckish. Important information to come out of the talk was fertile eggs have veins on the egg shell and baby chickens don't need food for roughly 2-3 weeks.

The arrival of the baby chickens has captured the attention of everyone from the school community even Principal Mr.Clarke who made a number of visits to the lab to check on the progress of the baby chicks. Unfortunately one of the baby chicks named Todd didn't make it and tragically passed away to the devastation of all students. On the bright side all the other baby chickens seem to be fit as fiddles and I'm sure the baby chicks' stay in Ms.Mercer's lab will be as good if not better than a 5 star hotel.

Wednesday 26TH October
Leanne from Nore Valley Farm visited the school & spoke to the Science classes about ‘The Incubator Project’ and set up the incubator with seven eggs. The chicks require warmth, humidity and to be turned regularly in order to hatch.

Tuesday 8th November
Leanne returned to the school to candle the eggs. This is where by a light is shone on the eggs in a darkened room to see their development and if the egg has been fertilised or if it has died. Six out of our seven eggs are fertilised!!

Friday 11th November
The first crack is seen on one of the eggs by Ms Mercer’s 1st Year Science students. More cracks are seen in the afternoon on the eggs and they are getting bigger!!

Monday 14th November
The first chick has been christened Eggbert by Mathew Hogan in 3rd Year Brendan hatched in the morning and he was left in the incubator for 4 hours until he was moved to the brood box with a heat pad. A second chick hatched in the evening and has been named Todd by Tom O'Donnell in Transition Year. He was moved into the brood box with the heat pad later that day. They are not fed or watered for another two days.

Tuesday 15th November
One of the chick sadly passed away as he had escaped from the heat pad over the previous night…RIP Todd…you will be missed!! We are cheered up by the sight of another chick hatching and Ms Mercer’s 1st Year Science students get to watch the whole process! Andy O'Donnell 3rd Year Colmcille has named him Dr Pecker!

Wednesday 16th November
Chicks causing lots of noise in the laboratory and entertaining the school with their cuteness. They are fed and watered for the first time by Ms Dooley.

Thursday 17th November
No more cracks on any of the other eggs to be seen when examined by 5th Year Biology classes. Mr Clarke gets a cuddle with the chicks!!

Tuesday 22nd November
Leanne from Nore Valley Farm returns to the school to collect the incubator, the brood box and our little chicks so they can be returned to the farm.

Great experience for all of us!
ISTA SENIOR SCIENCE QUIZ

On Thursday the 17th November 2016 two teams from CBS Kilkenny traveled to Carlow IT with Ms Dooley and Mr Kennedy to compete in the regional final of the annual science quiz. There was a large attendance and the competition was tough. Unfortunately neither team made it through to the final but they both performed very well with one team coming in fourth. Hard luck lads!
Team 1
John Connick
Dylan O Neill
Shane McGeary