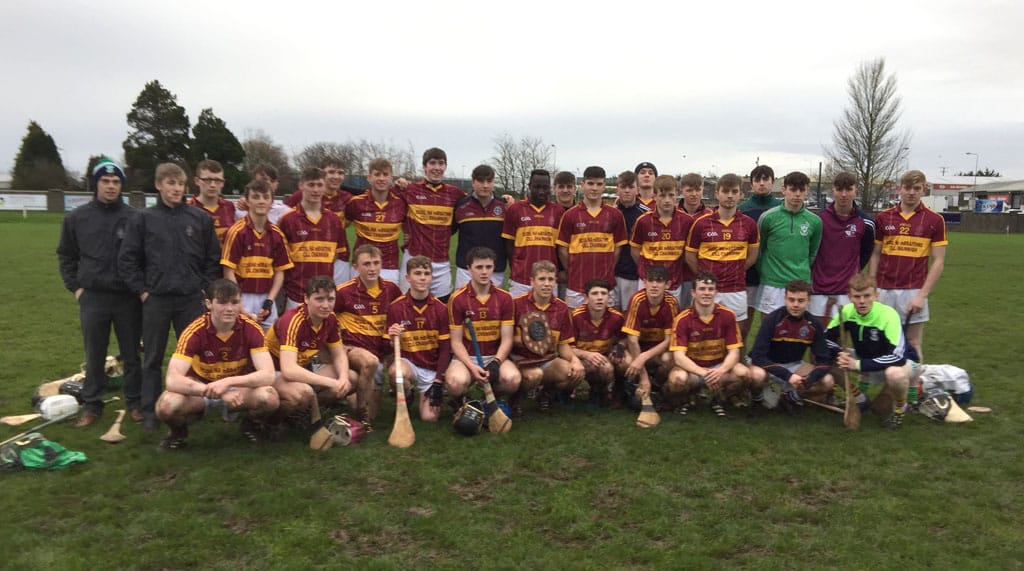 Great rivals St.Kieran's College and CBS Kilkenny did battle yet again on Sunday 26 February 2017 in the Leinster PP Schools Leinster Final in Nowlan Park. It was Kieran's who got off to the better start with a point from Adrian Mullan after three minutes, CBS seemed to be a bit nervy on the ball in the opening minutes but goalkeeper Ben Maher eased his sides' nerves moments later when he converted free from his own forty five to bring the sides level. The teams were proving difficult to separate as there was flurry of points between the sides. This left the score level at 0-3 points a piece after 15 minutes.

A point from Sean Bolger and from the Village man Niall Brassil in the 22nd minute drove the CBS into a 0-3 to 0-6 lead. CBS supporters in the stand may have been forgiven for thinking CBS would pull away in this situation, but unsurprisingly St.Kieran's wouldn't be brushed off quite so easily and had a rally of their own with two scores from placed balls and a score from Evan Shefflin from a tight angle. Both sides had goal chances neither of which were clear cut, Kieran's had a Shefflin snap shot saved by Ben Maher while a CBS free dropped short in the square but no one was in the position to put it away. There was very little to separate the outfits at half-time but it was CBS who went in with the narrow 0-6 to 0-7 lead.

The second half began very much like the first and the word to describe it was tight,however to the concern of the League champions it was there opponents who were beginning to edge in front with 4 of the 5 points scored in the opening ten minutes going the direction of St. Kieran's College giving them a 0-10 to 0-8 lead after 39 minutes. CBS responded by pointing two successive scores from a Ben Maher free and Sean Boyd leaving the scoreline all square.

For the next 15 minutes it was tit for tat as each time Kieran's regained the lead CBS pulled them back. On the score sheet for the CBS was Conor Drennan from a free and Sean Bolger. St.Kieran's had a 2 point lead with two minutes to go but the CBS effort didn't fade as continuous pressure was rewarded with a free which was dispatched by Niall Brassil leaving the score at 0-13 to 0-14 going into stoppage time. With very little between the sides all afternoon it was either going to be a moment of brilliance or fortune that would win the Leinster crown and unfortunately from a CBS point of view it was a latter as a looping shot from Sean Ryan in the centre of the field found the net as the low lying sun seemed to hinder goalkeeper Ben Maher's sight, to leave a bitter end to a fantastic performance from the O'Loughlin Gaels man.

A four point defeat somewhat flattered St.Kieran's who were level with their city opponents a whopping 8 times. I'm sure both sides would have taken a draw with 10 minutes to go. The CBS players and management won't dwell on this defeat as they have an All-Ireland Quarter Final to focus on against Athenry of Galway on Saturday in Banagher. Everyone at CBS Kilkenny wishes both the panel and the management team all the best for Saturday.
Leinster PP Schools SH 'A' Hurling Quarter-Final Report, Feb 4th 2017

On Saturday 4th February fans from both CBS Kilkenny and Dublin North made the trip to Ratheniska, Co. Laois for the Leinster PP Schools SH 'A' Quarter-Final. CBS had a promising start with good passages of general play however with their two opening efforts on goal going wide from Sean Boyd and Sean Bolger. Eventually after eight minutes Conor Heary broke the deadlock to get the Kilkenny side on the score sheet. Conor Heary doubled CBS's lead but a super score from Dublin North left a point between the sides after 15 minutes. Four successive wides followed from CBS causing some concern on the sidelines. Concern soon turned to delight as CBS put together some excellent moves and the scores to match from the likes of Sean Boyd, Sean Bolger and Niall Brassil. CBS were the dominant side in the first half and had a large share of possession and chances but to the Dublin's side's credit when they had opportunities they took them which just about kept them in the game at the break. At half time CBS Kilkenny went in with a comfortable 0-14 North Dublin 0-6 lead.

You may have been forgiven for thinking the result was a foregone conclusion at half time with CBS's eight point lead but goals change games and unfortunately the opening goal went North Dublin's way with a crisp shot into the bottom leaving goalkeeper Ben Maher no chance between the sticks. From the resulting puck out North Dublin regained possession and landed another two scores in quick succession leaving just four points between the sides with 35 minutes gone. A free from Sean Bolger and a point from Niall Brassil steadied the CBS ship. Mid way through the second half the CBS men made a charge to drive this victory home as the North Dublin keeper was forced to pull of two fabulous saves but eventually his luck ran out as Mick Doyle marched on goal to see his effort initially saved however Sean Boyd followed up to put the ball in the back of the net in the 51st minute. Two scores from placed balls from Sean Bolger insured victory for the CBS with a scoreline of 1-19 to 1-12.

Overall this was a very good display from the CBS with some very good performances across the pitch but none more so than Conor Heary who was top class in general play and prolific between the posts. The next hurdle for CBS Kilkenny is Good Counsel College from New Ross in the Leinster Semi-Final this Saturday 11th of February at 2pm in Thomastown.

In the early exchanges it was tit for tat as both sides traded scores. The first two points registered by Killian Egan and Adrian Mullen for St. Kieran's College were followed by scores from Conor Drennan and Sean Bolger for CBS.

In a finely balanced first half it was a noble effort by Conor Heary who withstood two serious body charges to solo up along the sideline and register a fantastic point to nose CBS Kilkenny ahead at the interval by the narrowest of margins, 8 points to 7.

CBS Kilkenny came out of the traps with determination and struck for the game's first goal from Niall Brassil in the first three minutes of the second half, to give CBS a four point advantage. This was followed by a point from Adrian Mullen before Ronan Buckley backed himself to slot home a fine individual effort in registering a second green flag for CBS by the ninth minute of the second half. St Kieran's College responded with points from Diarmaid Phelan, Daithi Bannon and Eoghan Moylan to bring it back to a three point game.

CBS Kilkenny then had a huge score from Sean Boyd, followed by Conor Drennan's third point from play and then a long range point from a free by CBS goalkeeper Ben Maher, bringing the score to 2-11 for CBS and 0-13 for St. Kieran's College.

In a pulsating final ten minutes there were many heavy physical exchanges with possession being at a premium. After a stalemate period, Sean Bolger reached high to snap the ball and laid off a lovely hand pass to Captain Niall Brassil who calmly struck a long range point from his own 65.

This appeared to be the insurance score for CBS but St. Kierans' had one final rally with a last minute goal from Padraic Mullen to narrow the gap to two points.

With the game on a knife edge and now in extra time, St. Kieran's launched one final attack on the CBS goal but the heroic efforts of Ronan Buckley, who swallowed up the ground to hook Diarmuid Phelan and spurn the St. Kierans' boys' efforts ensured sweet victory for CBS Kilkenny in another titanic battle CBS 2-12 St. K 1-13.

This was a fine team performance for CBS Kilkenny and signals their intentions for the Leinster Championship in 2017.

Congratulations to the excellent panel of players and to the team management, Mr Niall Tyrrell, Mr Seamus Dwyer and Mr Matthew Ruth. 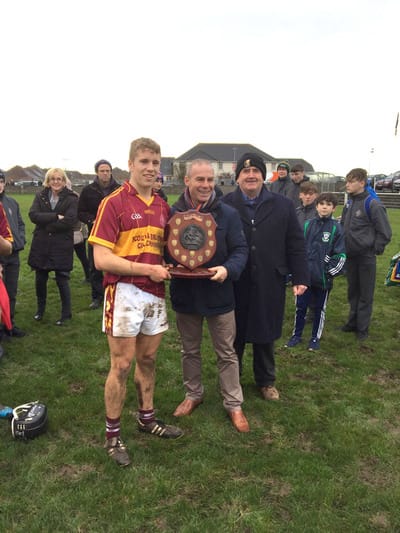 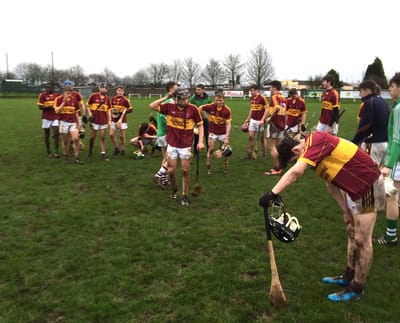 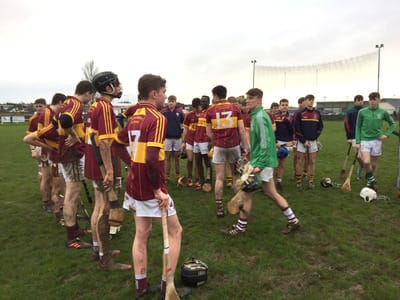 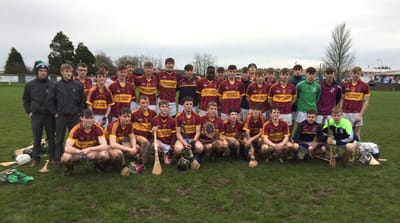 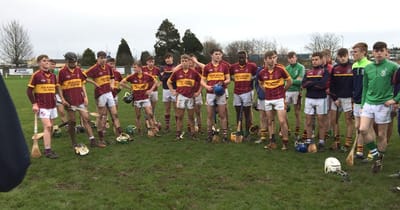 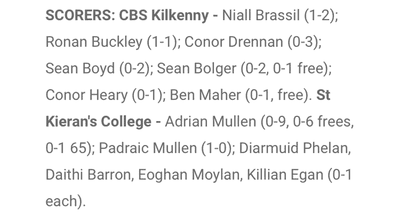 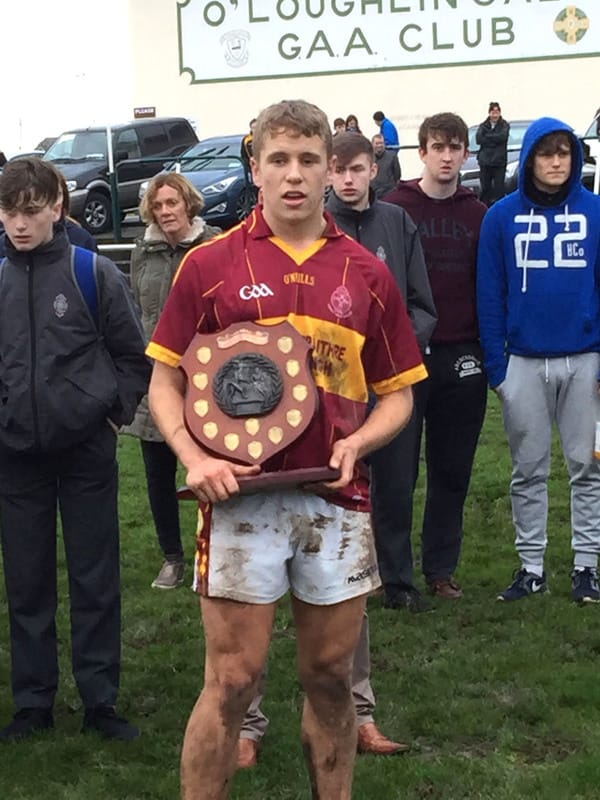 The past decade has been one of the most successful eras of our school’s hurling history at all levels, but particularly at Senior level. Reaching Leinster Senior and All-Ireland Finals has become a more regular occurrence and there is a sense of expectation each year that to progress to provincial and national finals is almost a minimum requirement.

We compete annually in Leinster Senior Colleges ‘A’ Hurling for the Corn Ui Dhuill. In our history we have reached this competition final nineteen times winning the trophy on eight occasions. Eight of those nineteen final appearances have happened since 2002, and three of our victorious days have been achieved from 2006 on. The back to back Corn Ui Dhuill victories of 2013 and 2014 was the first time the CBS achieved this difficult feat. Following the introduction of the ‘back door’ system in the mid noughties, reaching the provincial final has become an even more attractive proposition with both provincial finalists advancing to compete for the national blue riband competition, the Croke Cup. CBS Kilkenny has reached this All-Ireland Final on six occasions and four of those appearances came in 2007, 2012, 2013 and 2014. While unsuccessful in all four deciders, the recent and consistent resurgence of our senior teams cannot be denied and this can only spell further success going forward and hopefully we can add to our 1981 Croke Cup victory. The rising profile of Kilkenny CBS Senior teams has also coincided with a marked increase in the number of our students representing Kilkenny at minor level. In recent times as many as eight of our players have featured on the county minor panel.

Each year a senior panel is chosen to compete in the Leinster League which usually involves three group games, with the final in December. The real business of the championship commences in January/February following a busy preparation over the Christmas period often involving challenge matches against the leading teams in Munster. Strength and conditioning, core work, stretching and flexibility training and weight training are all incorporated and professionally planned and supervised. The health and well-being of all of our players is of paramount importance. Injuries are monitored, and treatment and physiotherapy are arranged. The redevelopment this year of the school gym has greatly helped in preparing teams for competition. The development of the Brothers’ Field has also greatly enhanced the training of the panel over the past two years in honing the players’ skills on an excellent training surface.

​Senior Management is rotated on a two-year cycle ensuring a freshness of approach and also allowing management teams to work with different age groups. The current senior panel of thirty have been working hard and are looking forward to the first round at the end of January 2016 against Good Counsel. We wish the panel of players and the management team of Mr. Niall Tyrrell and Mr. Matthew Ruth the best of luck in the upcoming campaign.