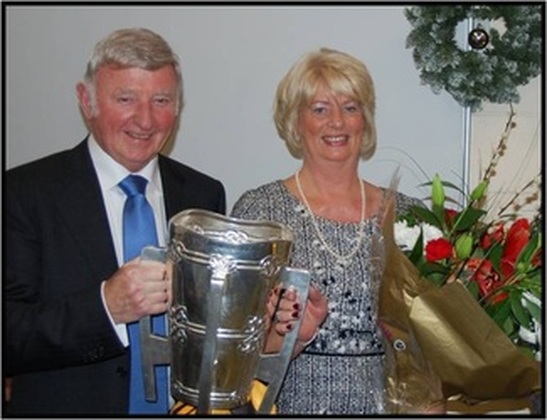 Tony and Frances O'Brien
​TONY O’BRIEN
The school community is deeply saddened to learn of the death of Tony O’Brien RIP, friend and benefactor of the school, and after whom the Tony O’Brien Scholarship Fund was named.

A native of Piltown, Co.Kilkenny, and a CBS Carrick on Suir man himself, Tony lived most of his life in Dublin but never really left Kilkenny. His greatest thrill was to witness his home county win yet another All Ireland Senior Hurling Final, and both his working and leisure life were organised around that first Sunday in September in the hope that Kilkenny would make the final. He was overjoyed when on a visit to the school Mr. Matt Ruth let him hold, for his first time, the Liam McCarthy!

Tony O’Brien was one of the leading business executives of his day. He served as Chief Executive of C&C for 21 years, was Director of CRH, Past President of IBEC and Chairman of the Review Body on higher remuneration in the Public Service. In 2002 he was appointed Chairman of C&C, a position he held until his retirement in 2010 having spent 40 years with the group. C&C plc established the Tony O’Brien Scholarship Fund to honour this Kilkennyman who had contributed so much to industry in general and to C&C in particular. This was Tony’s wish, that students of this school would be enabled to attend UCD’s Quinn Business School and perhaps follow in his footsteps. To date nine students have been worthy winners of this most generous and prestigious award.

When news of his death filtered through the school on Friday Dec 18 2015, the students were so impressed that a man could so value education and be so personally generous that they wished to form a guard of honour at his funeral and offer their sympathies to his wife Frances who is also a good friend of the school, his son Shane and his extended family and friends.